Opening their brand new site at 200 S. Austin, Keller Williams Seguin has purchased and is well underway with renovations to the historical building that sits on this downtown corner.

Among the more dramatic parts of the renovations involve the lobby of the building, which will include entrances from both the side door and front doors and a glass front exterior. To add to the appeal of the lobby, from the view of an outsider looking in, Stephanie Hornsby, Team Leader and the new co-owner of the building, has commissioned a local area artist to paint a mural of Seguin on the exterior.

Brittany Tradup, known locally as “The Mural Mom,” is a mural artist serving the Schertz, New Braunfels, and San Antonio areas. A full-time artist, the former marketing professional specializes in custom murals and is known for her life-like children's rooms and nursery paintings. From whimsical fairy tale murals that inhabit an entire room to underwater scenes designed for a playroom, Tradup has created fascinating, timeless designs, though, more recently, she has entered into the commercial project landscape. On the heels of wrapping up a room painted to fit an ancient Egyptian theme for New Braunfels’ Escape Haus, Tradup was eager for more projects. 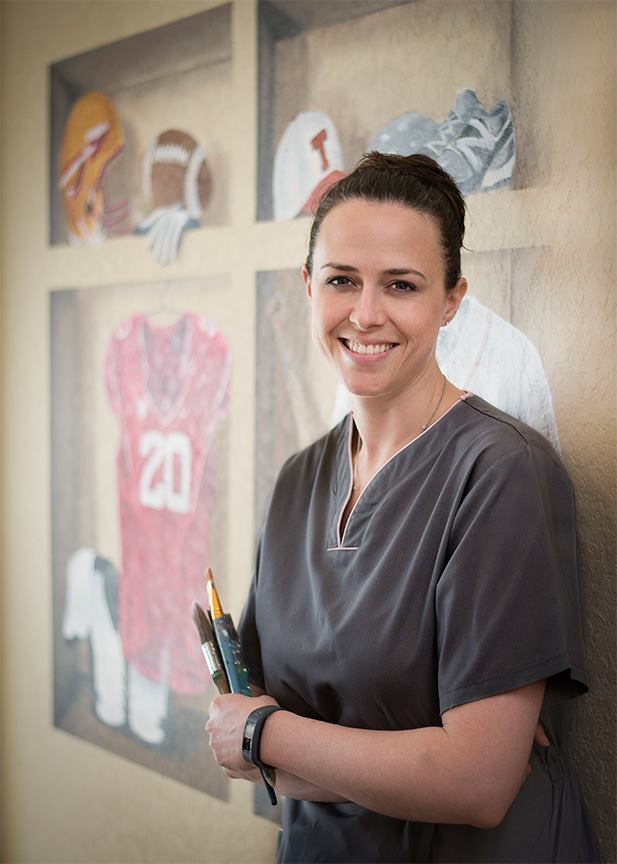 “I was looking for someone to paint this mural and had been asking around for recommendations,” recalls Hornsby. “I had several painters recommended to me, but Brittany’s name was mentioned three different times by three different people and I had to track her down and get a bid from her.”

Once Hornsby and Tradup met, it was clear this project would be a good match for both of them; while Hornsby had a general idea of what this mural should look like, Tradup had the design skills to bring it to life.

“Currently we are in the design phases: sketches, mock-ups… planning,” offers Tradup. “The design is based on a map of Seguin, but we really want it to be a landmark. We want people in the community to say ‘meet me at the map’ when they are deciding how and where to meet up.” While the thought process is to make the 11.5 by 8 ft mural somewhat of a street map, Tradup knows that a simple street map design isn’t what is going to be most appealing. Additionally, she understands that in order to capture people’s attention, the mural will need to have features and highlights of the Seguin community in it.

Currently, Tradup is estimating the project will take two weeks once the design plans are finalized. While there is not a completion date at this time, both the building, which began construction in May and the painting are expected to be complete by the ribbon cutting ceremony and grand opening on October 27th, 2016.