Did you know? The Texas Hill Country growing in popularity. As more and more folks move to Texas for the natural beauty, great schools, and tremendous work opportunities, it has also become the second most desirable place to retire, topped only by Florida! Those relocating to the area, and the state in general, quickly realize why the Hill Country is such a special place. From a unique culture and geography to tremendous food and unparalleled attractions, the Hill Country has something to offer every resident.

The culture of the Hill Country is a unique blend. Combining the small town traditions of the South with a distinct European ancestry, Hill Country towns are an incredibly desirable place to settle down. The area draws roots from quite a few different sources. Beginning in 1700's, the Spanish were the first Europeans to settle in the Hill Country. After the Texas Revolution in 1835, more immigrants began to trickle into the area. Notably, a heavy influx of German immigrants colonized in towns like New Braunfels, Fredericksburg, and Boerne. French colonists settled into towns like Castroville, while Spanish and Mexican influence remained prevalent in the greater San Antonio area. Over time, cultures began to blend, creating the way of life we enjoy in the Hill Country today. From music to food to wine, residents can enjoy all the beauty each culture has to offer. From the yearly Wurstfest and Weihnachsmarkt in New Braunfels to St. Louis Day in Castroville to Fiesta each year in San Antonio, the combination of cultures in the Hill Country is hard to beat.

In a way, the blending of cultures in the Hill Country can be attributed to the attractive and diverse geography of the area. Most residents find that no matter their origin, some portion of the Hill Country "looks like home." The Hill Country generally remains true to its name, as it contains miles upon miles of large rolling hills. However, the area is also home to large grassy areas, arid areas, and many different natural water resources. In addition to the hills, the beautiful and unique waterways of the Hill Country make it a desirable area. From the tree-lined Medina to the large and picturesque Guadalupe or the infamous Colorado, the rivers throughout the Hill Country can appeal to everyone from fly-fishermen to bow-fishermen. Thanks in large part to the abundance of rivers, the area is also home to a multitude of picturesque lakes. Lake Travis and Lake LBJ may be the most popular, thanks to the large hills surrounding their banks, as well as picturesque views and the wide water areas catering to water sports. Lake Travis is particularly unique as the water in the lake appears the same turquoise-blue color associated with Caribbean vacations. In addition to beautiful retreats, the impressive natural resources in the Hill Country also make for great hunting. Deer leases abound throughout the area, which also is home to wild turkey, wild hog, and a variety of birds. White-tailed deer are known to be particularly plentiful in the area, attracting hunters from across the country.

The Hill Country boasts quite a few attractions, both natural and man-made. Towns like New Braunfels and Fredericksburg are attractions in their own right, thanks to carefully persevered history and culture. Possibly the most infamous attraction in the region, Enchanted Rock is a recognizable landmark. The rock is a dome made entirely of pink granite, which results in an orange and red glow at sunset. Due to the geological makeup of the region, the Hill Country also contains an unusual number of caves and caverns.  Natural Bridge Caverns is one of the most famous. Other entertainment venues include  Natural Bridge Wildlife Ranch (a drive-through safari home to Zebras, Giraffes, Rhinoceros, Ostriches, and more) and the various stops on the  Texas Wine Trail. 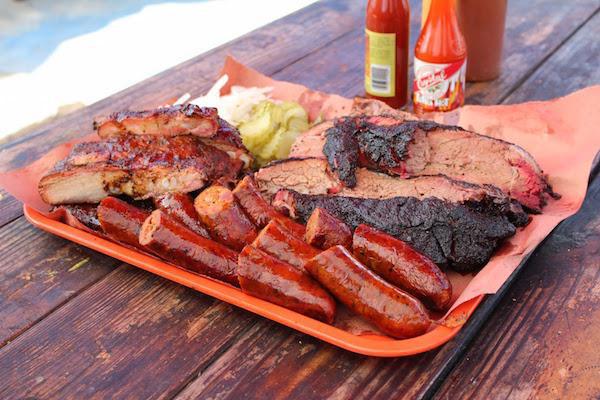 In a state famous for high-quality barbecue, the Hill Country hosts some of the most famous smokehouses around. Lockhart, Texas is often referred to as the "Barbecue Capital of Texas." A few miles to the West in Austin lays the world famous  Franklin’s barbecue, known for smoking the best brisket in the country. The statewide barbecue powerhouse of  Rudy’s began just West of New Braunfels in Leon Springs. Frankly, it may be harder to find poor barbecue in the Hill Country than it is to find good barbecue! In addition, the different cultures throughout the region have resulted in a variety of different foods. New Braunfels is well-known throughout the state for high-quality German food.  Alpine Haus Restaurant combines old world flavor with new world convenience to deliver a fantastic German dining experience.  The Gristmill in Gruene, Texas provides traditional down-home cooking with a great atmosphere. Famous for its beautiful location on the cliff overlooking the Guadalupe River and proximity to Gruene Hall, visitors travel from miles around to dine at the Gristmill. Last but not least, it’s hard to beat the Tex-Mex found in the Hill Country. From local chains like  Chuy’s and Alamo Café to mom-and-pop taco trucks, it’s easy to see why Tex-Mex has expanded across the country as a favorite food genre.

It’s easy to see why the Texas Hill Country is loved by so many. With plenty of things to see and do but a pace predicated on peacefulness, the way of life is second to none. Interested in buying a home in the hill country? Don’t hesitate to contact one of our agents today!


6 Reasons New Braunfels Real Estate is Perfect for Your Business