Simple, concise, and straightforward, Das Rec’s flagship motto may seem at first glance to be nothing more than a catchy slogan. However, take a step or two across its newly christened threshold, and you’ll find the truth is obvious:  this artfully planned and executed recreation center is indeed making a tremendous impact on the community of New Braunfels, TX. 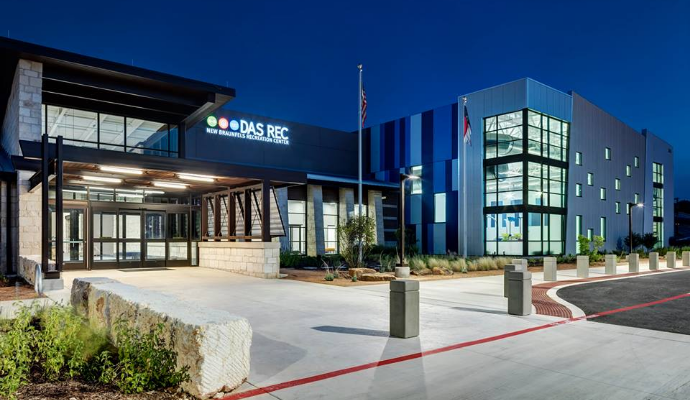 A New Era of Public Recreation in New Braunfels

The product of over five years of intensive planning (and nearly $25 million of both public and private funding),  Das Rec came at just the right time in New Braunfels’ growth. As the once-little “River City” has grown from 58,000 to 80,000 residents in just 8 years (ranking as the second-fastest growing city in the country), the existing infrastructure needed to find a way to keep up.

Far from merely an expanded facility, the brains behind this brand new recreation concept sought to go a step further than the standard “just build a bigger gym” mentality. Instead, the question at hand was: “How do we meet the increasingly dynamic and diverse needs of New Braunfels’ evolving population?”

To ensure this question was answered well, city leaders held public forums, interviewed individuals, and spoke with schools and senior centers to discover what the community really wanted in a public recreation center.

By infusing the process with this sort of grassroots urban planning, city leaders and collaborating architects (Dallas-based Brinkley Sargent Wiginton Architects) were able to customize blueprints that fit with New Braunfels’ unique needs, desires, and personality...all in a state-of-the-art 77,000-square-foot building. 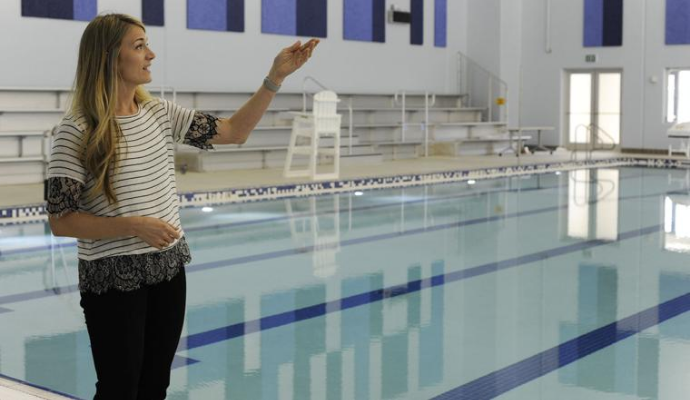 What The People Wanted

So just what did the population of New Braunfels cry out for in a public community center? Unsurprisingly, “swimming!” was at the top of the list. As a town nestled on the confluence of two sparkling rivers (and housing one of the most iconic water parks in the world), New Braunfels is undeniably obsessed with aquatic fun. To ensure our community is full of strong, capable swimmers, the center will provide year-round swimming and learn-to-swim opportunities.

Next, the people asked for, “sports!” (And, this is Texas. Are we surprised?) Many parents expressed the desire for well-staffed recreation leagues to increase athletic opportunities for young children who don’t make school teams. With multiple sports available (from volleyball to “futsal” to something called “bubble soccer”), kids and adults of all ages are granted the opportunity to participate in a little friendly competition.

Finally, the center integrated a strong dose of New Braunfels’ personality into the facility. The name itself a playful nod to the town’s German roots, Das Rec’s programs, staff, and offerings prove cheerful, playful, innovative, and fun. The center, therefore, places a high emphasis on outside-the-box ways to work out, stay fit, and play together. From “mermaid swim parties” to swing dancing, Das Rec has already delighted residents with its whimsy version of community health.

The Beginnings of Das Rec

When the plans were presented to the public, the support was overwhelmingly positive. The bond package was passed in 2013 by New Braunfels voters who also saw the impending need for this sort of amped up community space. The initiative allocated $16 million to Das Rec.

And, after architects and city planners began dreaming bigger (think: two pools instead of one…), the already-ambitious plans received even more generous funding from sources like New Braunfels ISD, New Braunfels Industrial Development Corporation, and The New Braunfels 4B Board. By the end of the project, it had grown from 50,000 to 77,000 square feet (and $16 million to $23.4 million in funding).

The center was finally completed, christened, and opened to the public on June 23, 3018, receiving overwhelming public acclaim. 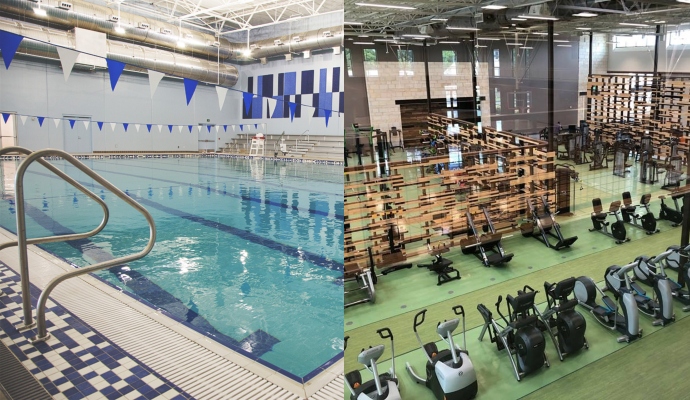 Besides simply a place to “work out”, this community center creates space for personal training and group fitness. Featuring plenty of classes (from high-intensity interval training to yoga to aqua workouts), Das Rec is designed to help you get fit in whatever way you enjoy best. 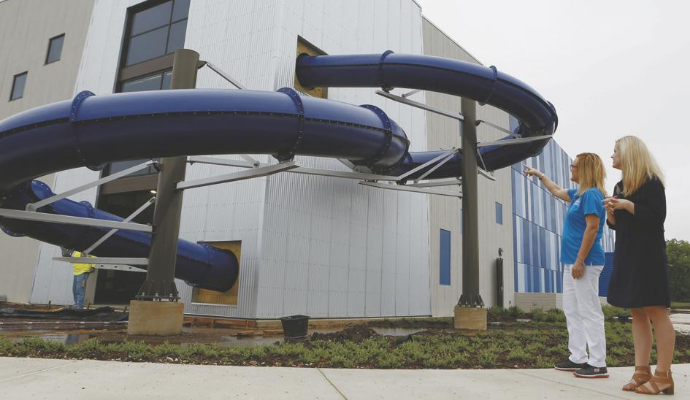 Nearly smack-dab in the center of New Braunfels, Das Rec is not a suburban facility. Located at 345 Landa Street, this community center was constructed very intentionally in the heart of the city. Built on a former lot left empty after a nearby grocery store and strip mall burned down, Das Rec is now considered a redevelopment project that will increase interest and real estate values in the surrounding area. Along with the recreation center, new sidewalk trails have been constructed along Landa Street, connecting Das Rec with nearby Landa Park and multiple favorite local businesses. 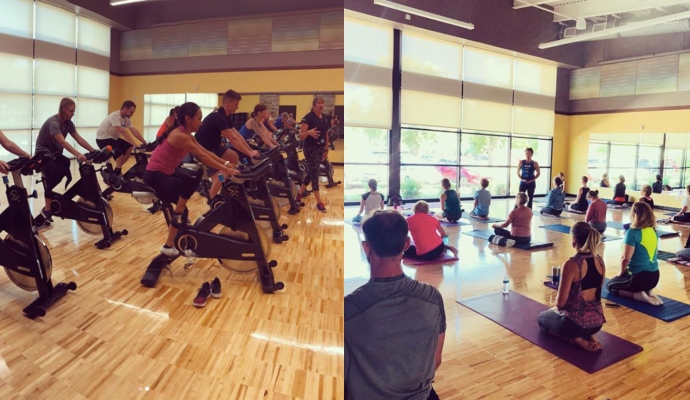 Accessibility for the Whole Community

When creating the innovative plans behind Das Rec, city leaders led a strong desire to make the facility relevant and accessible to all members of the New Braunfels community. As such, Das Rec welcomes people of all ages, skill levels, and abilities through a variety of services and programs, including scholarship opportunities and senior-focused fitness programming.

Das Rec’s mission statement perhaps puts it best: “...to enrich the quality of life for our community by providing unparalleled recreational programs and services to promote physical, social, and emotional health and wellness.” 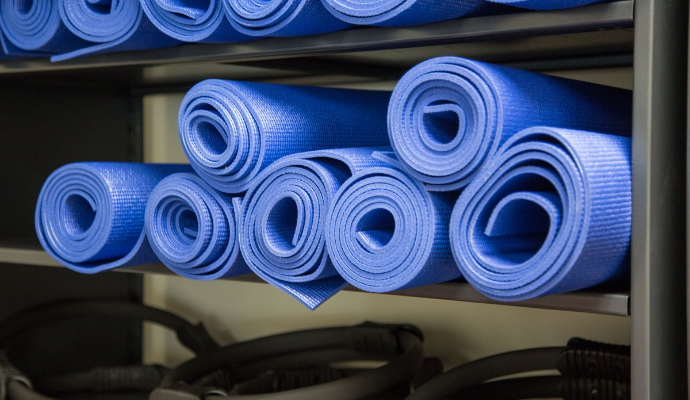 Are you a resident of New Braunfels? Lucky you. To join as a member of Das Rec (a privilege only afforded to New Braunfels residents), you can purchase a membership during business hours (Monday through Friday from 5:00 AM to 9:30 PM and Saturday through Sunday from 7:00 AM to 8:00 PM) and get your fitness on.

...and, if you need a little motivation, just remember: “Es wird nicht leichter. Du wirst stärker.” (Translation: It doesn’t get easier. You get stronger.)

If you’re ready to join the dynamic New Braunfels community, we’d be honored to be the ones to help guide you through the whole process, from connecting with a lender to signing the closing papers. Plus, we’ve created an exclusive guide just for the New Braunfels buyer! Let us know how we can help your search for the right home as seamless as possible.

Beyond the Comal: 6 More Waterways Around New Braunfels