13 NB Traditions That Prove This Town is Unstoppably German 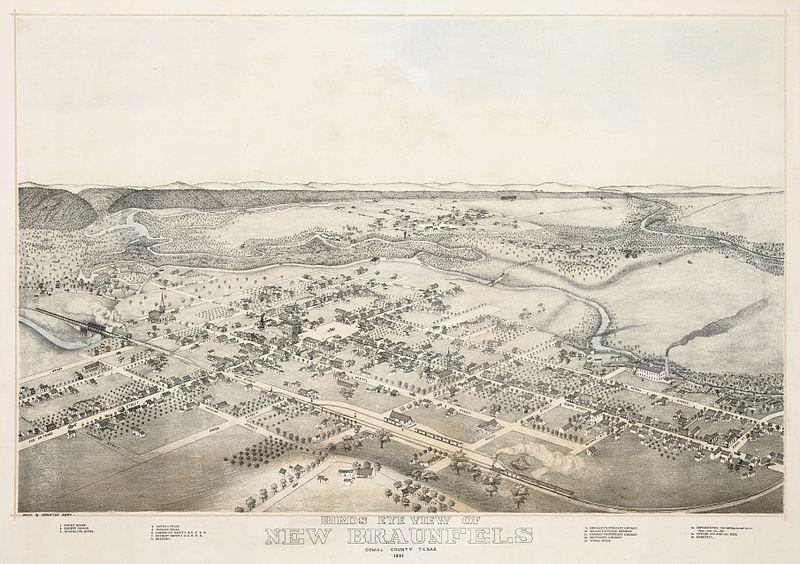 Blink and you might miss it; visit and you just might stay. Set on the eastern cusp of San Antonio’s I-35 corridor (and solidly within the Hill Country's “German Belt”), New Braunfels has laid its claim to a particularly stunning piece of Hill Country land since the 1840’s.

When Prince Carl of the Solms-Braunfels region of Germany was seeking a parcel of land to start a colony, the intersection of two sparkling rivers appeared the perfect setting. Turns out, he was right. New Braunfels was formally established on March 21, 1845, and later grew into one of the most historic German-American communities in the nation.

And, from fabulous Oktoberfest celebrations to old-school kolaches, New Braunfels knows how to keep their German heritage alive and well. Here are 15 ways our favorite little “river city” welcomes its residents and visitors to, “Sprechen ze deutsch.” 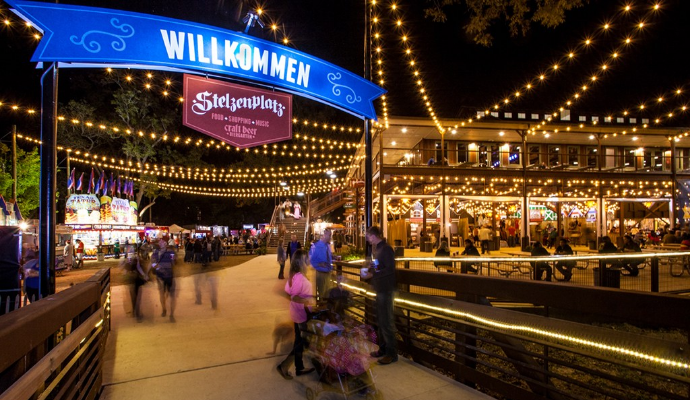 Despite the 5,000 mile distance from New Braunfels to Deutschland, many locals have cherished and continued practicing the German language. Many older residents speak affectionately of a time when most families grew up speaking German in their homes (often a unique dialect known as “Texas German”). Although New Braunfels has transitioned into an English-dominant town, you can still spot plenty of German words and phrases around town, as well as receive tutelage in the language via “Deutsche Sprachschule.”

What would a German town be without its goodies? Naegelin’s Bakery offers up a nostalgic piece of New Braunfels history, as well as plenty of traditional goodies. As Texas' "oldest continuously operating bakery,” Naegelin’s has been serving pfeffernüsse and streusel since 1868 (still baking up recipes developed by the Naegelin family over a century before).

Proclaiming itself as “unapologetically local” since 1852, New Braunfels’ hometown paper “The Herald-Zeitung” was originally printed exclusively in German (making it the first of its kind in Texas). The newspaper was founded by Ferdinand Lindheimer, a botanist who played several crucial roles in developing the town’s identity. Although the newspaper is no longer printed in German, many of the paper’s sections still bear German titles, including the community events in the "Stammtisch" section (a word that can be loosely translated to "table reserved for regulars"). 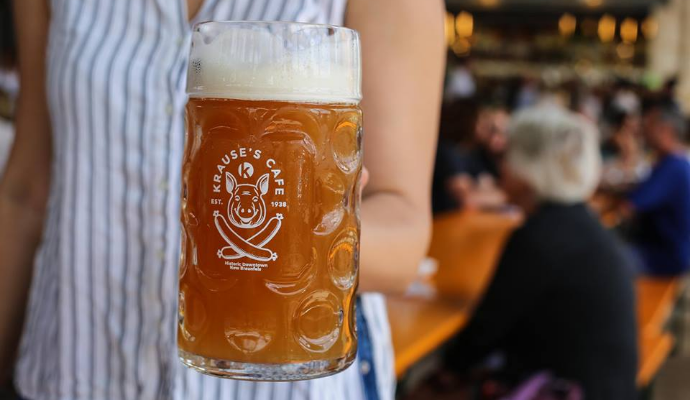 Perhaps the most classic mark of a German town can be found foaming in its beer steins. Plenty of establishments across town carry on the long-held tradition of “prost-ing” with good brews with good company. One of these spots, the iconic 1930’s Krause’s Cafe, was recently revamped and re-opened into a hybrid biergarten-bierhalle serving up authentic German food and craft beers!

Fiercely dedicated to preserving the heartbeat of the town’s original heritage, the New Braunfels German American Society touts itself as “a little piece of Germany in New Braunfels, Texas.” Boasting over 700 members, the society hosts traditional annual events like Maskenball (a costume ball), Weihnachtsfest (a festive Christmas party), ninepin bowling, and more. According to the society, their purpose is to “encourage the use of the German language, to identify and preserve the valuable elements in our Texas culture contributed by the Germans in this great State, to encourage German American exchange, and to promote activities within the community that reflect cultural values of German origin.”

While most New Braunfels’ 73,000 residents can’t claim a purely “local” heritage, there are some fifth-generation New Braunfels residents who can trace their roots all the way back to 1845! These early settlers followed Prince Carl of Solms-Braunfels, Germany when he founded the town on the Comal River under a German charter. 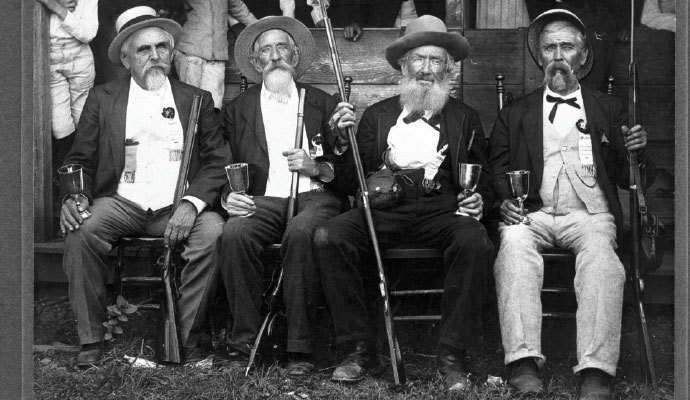 Image Courtesy of historyinnewbraunfels.com (Pictured: four of the original Schuetzen Verein members at the 50th anniversary, 1899)

Beer, brats, and...a shooting club? One of the more unique German bytes in town, the New Braunfels “Schuetzen Verein” is a rifle club with roots stretching back to 1849. With a primary focus on target shooting, the Schuetzen Verein has grown tremendously over the years, holding its classic “Koenig” matches annually since before the Civil War. 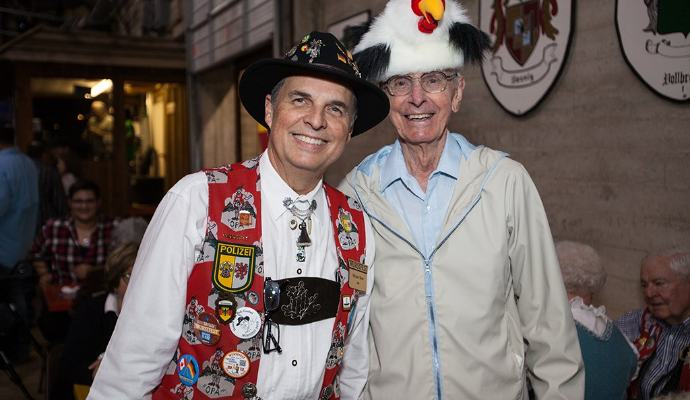 Sprechen ze fun? Wurstfest, one of the most heralded Oktoberfests in the nation, is a born-and-raised New Braunfels tradition that draws in thousands of visitors every year. This celebration of all-things-German includes carnival rides, sausage, beer, music, dancing, and “the finest in Alpine and Bavarian Style Entertainment.” We’re inclined to agree that Wurstfest offers “the best ten days in sausage history.”

Walking around New Braunfels, it’s clear that the town’s heritage is built into its very foundations. Many historic buildings have been carefully preserved and maintained by local businesses and residents (as well as the New Braunfels Conservation Society). A prime example: the 1903 homestead pictured above displays architecture reminiscent of the early German-vernacular homes built by the early settlers. Many modern homes also display a hybrid "Euro-Texan" architecture that honors these early styles. 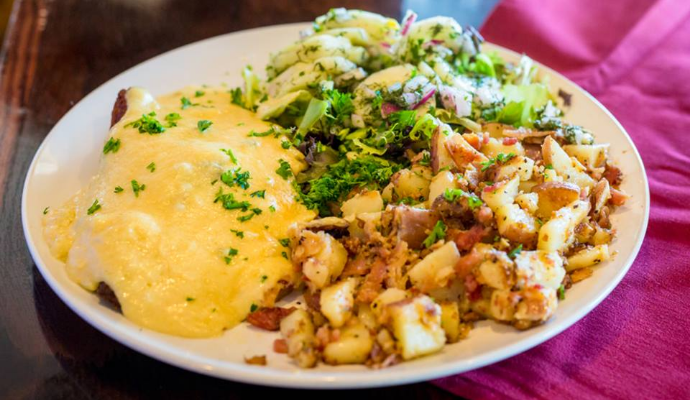 Where better to celebrate German cuisine than at the self-proclaimed “biggest German restaurant in town”? Freisenhaus, a local staple, has been serving up schnitzel, bratwurst, leberkäse, potato salad, and strudel for years on end. This German family-owned-and-operated restaurant and beer garden is the perfect spot to appreciate the original tastes and flavors of New Braunfels. 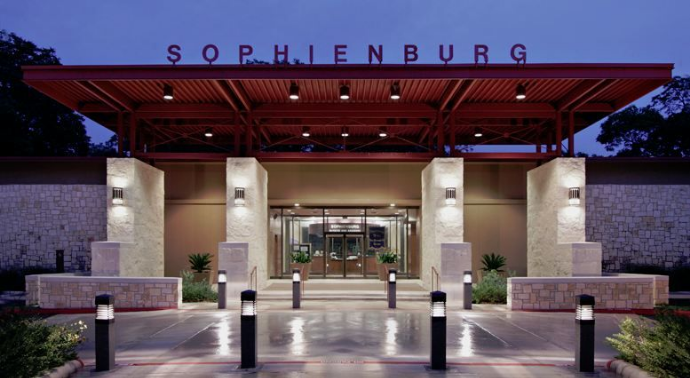 Image Courtesy of the Sophienburg Museum

Once you’ve tasted the fruit (or pastries) of New Braunfels’ German influence, head to the local Sophienburg Museum to take a closer look at the behind-the-scenes story. With exhibits that span the spectrum (from images and artifacts to maps and documents), the Sophienburg is a particularly rich well of knowledge, lectures, and community events revolving around New Braunfels’ German roots. 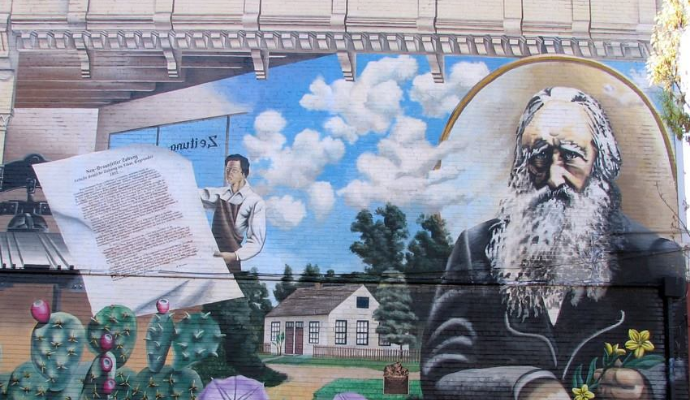 Composed of six historic building murals, the New Braunfels Historic Outdoor Art Museum stands as a colorful public reminder of the story of New Braunfels. More than just lively additions to the area’s aesthetic, these murals trace the vibrant history of New Braunfels and invite residents and visitors to revisit the colorful stories and people who have shaped the town’s culture. Read more about the murals here!

13. The Secrets behind Gruene Hall

Gruene Hall may be a distinctly “Texan” icon in New Braunfels, but its tradition bears a surprisingly German past. Because singing was such a popular social activity for these early German settlers, they founded a singing society called “Germania Gesangverein” in 1850, and later the amusement hall “Saengerhalle” in 1855. This type of hall became popular for recreation, leading to the creation of Gruene Hall in 1878.

And, if you’re ready to live in a town that feels like a “getaway” most days of the year, we’d be honored to be the ones to help guide you through the whole process, from connecting with a lender to signing the closing papers. Plus, we’ve created an exclusive guide just for the New Braunfels buyer! Let us know how we can help your search for the right home as seamless as possible.